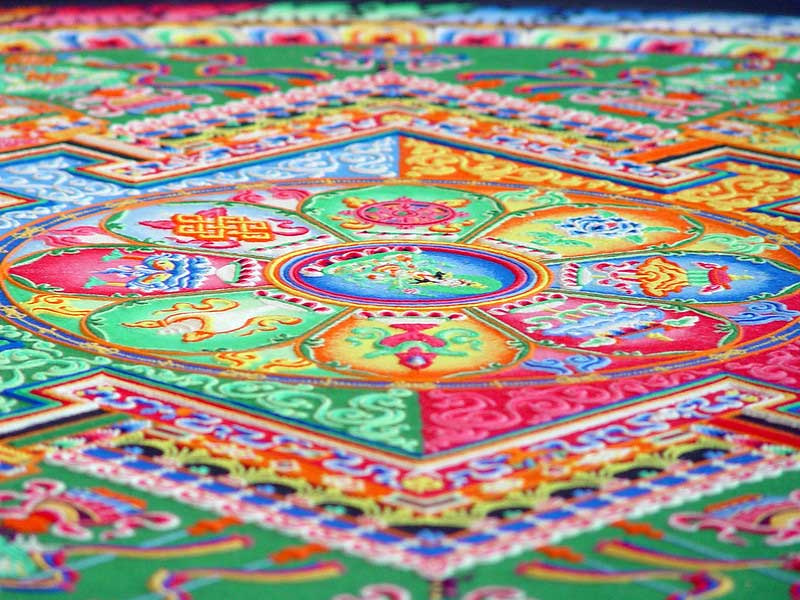 ephemera: things that exist or are used or enjoyed for only a short time

The life of this world is wind
Windblown we come, and windblown we go away.
All that we look on is windfall.
All we remember is wind.
Charles Wright

I wanted to write about the challenge of coming into relationship with our own impermanence and was particularly drawn to how this is reflected in art. Mystery, by its very definition, cannot be apprehended directly – we need symbols and metaphor to approach it. What also feels important to me is that, from all different eras and cultures, there are people and traditions that offer a response and maps that bear striking resemblances to each other – perhaps speaking to a universal, collective experience that transcends time. So I have gathered a small sample of those people in this one post.

One of the places where impermanence is reflected is in our dreams – they only exist in a liminal, unconscious space and often evaporate the moment we open our eyes. Or perhaps we are lucky enough to retrieve some of the images if we can write them down quickly enough. There’s another idea about dreams that has always fascinated me – the notion that we, and our entire world, are being dreamt. That we are all in somebody else’s (Buddha? a Higher Power? God? Goddess?) dream.

There is an animated movie called Rarg that my children once watched over and over again.
Rarg is one of the best 35 minutes you can spend – you can find it on youtube here (https://youtu.be/IP_f-klArPs). In the most nonsensicle sensible way it tells the story of a perfectly happy little town organized around the joy of discovery for its own sake. One day they discover they’re being dreamt by a total stranger whose alarm clock is ticking towards their imminent doomsday. Then it’s all hands on deck to retrieve the keeper of their existence, pre-empting the alarm and maintaining a quiet so profound their dreamer would never wake up. What they don’t foresee is a new dream that happily transforms one and all into flamingoes that promptly spread their wings and fly.

As Edgar Allen Poe once wrote: All that we see or seem is but a dream within a dream. I find this to be such a poignant reminder of our own ephemeral nature.

Buckminster Fuller, the iconic architect and visionary, was thought by many to be the last Transcendentalist of the 20th century in that he considered himself as a human being to be a part of life and nature, not a master over it. In his words, “I came to pass, not to stay.” His geodesic dome structures align with the architecture and precepts of the mandala – the organization around a center, a high ratio of enclosed area to external surface area and an equal contribution of all individual structural components to the whole.

Descartes famously said “I think therefore I am.” This Cartesian separation of body and mind became the underpinning for both philosophy and science in Western culture and is more or less completely taken for granted as the orienting assumption in many fields. Yet there is a growing counter narrative in those same fields that body and mind are, in fact, infinitely inter-related. The neuroscientist Antonio Damasio, for example, who has written “A mind is so closely shaped by the body and destined to serve it that only one mind could possible arise in it. No body, never mind.” And there is an emerging field known as eco-psychology that seeks to respond to the growing emotional stressors (and ongoing denial) of climate change. They see the premise of a mind/body duality as antiquated and as misleading people into assuming they are separate somehow from the planet they live on.

Andy Goldsworthy is a British sculptor and photographer who lives and works in Scotland. His work is all nature based and is fundamentally connected to the impact of the passage of time and natural forces. For him, “It’s not about art. It’s just about life and the need to understand that a lot of things in life do not last.” In the 2001 documentary “Rivers and Tides: Andy Goldsworthy Working with Time” (https://www.amazon.com/Andy-Goldsworthys-Rivers-Tides-Goldsworthy/dp/B0002JL9N6; trailer is here: https://youtu.be/khfR29SB6X4) he painstakingly constructs one of his guardian figures from myriad flat stones collected on the beach which is also the chosen location for the sculpture. It is deliberately sited so that the tide will wash over it as it comes in. The sculpture is tall and roughly egg shaped – we watch as it collapses repeatedly during construction as the tide creeps ever closer. Then we witness the tide eventually overtopping the completed sculpture without knowing what will be left when the tide once again recedes.

one of his book jackets describes it thus: the larger meanings of his work “are bound up with the forces that they embody: materiality, temporality, growth, vitality, permanence, decay, chance, labor and memory.”

Tibetan sand paintings – incredibly complex, beautiful pieces requiring hours and days of work by many people ; designed from the very beginning to be swept away and returned to nature. They very deliberately invoke the impermanence of life. It is conceptualized as a teaching to show that every living being has a beginning, a middle and an end. It is also organized around the intention of offering a blessing for all of the individuals participating and witnessing and for the earth itself. This blessing extends to all sentient beings anytime a mandala is created. One of the meanings of the word mandala in Sanskrit is cosmogram or world in harmony. It is believed that there is a special blessing for children, the sight of a mandala in their eyes is held to impart positive imprints which will sprout as tendrils of peace as they grow older.

The destruction of a sand mandala is also highly ceremonial. The sand is collected in a jar which is then wrapped in silk and transported to a river (or any place with moving water), where it is released back into nature. Sometimes half of the sand is dispersed to the audience as an additional blessing for personal health and healing. Some people disperse it around their yard for protection of home and family. Others make a place for it on their personal altars. Held in all of this is an acknowledgement of the ephemerality of life and the world.

I had the honor of witnessing the creation of a sand mandala at the Hammer Museum in Los Angeles. It was fascinating to watch the monks work with such precision and complexity with literally millions of tiny grains of sand. The colors were intense and beautiful and, even though I could not interpret the images, I could see the visual harmony and balance inherent in the design that was being executed. In researching this post I discovered that you can think of a sand mandala as a spiritual blueprint(the aerial view) for a sacred structure – a celestial palace populated with enlightened beings. I love the idea of invoking that micro/macro-verse and requesting its blessings.

There is a tradition of sand paintings in Navajo culture as well. They, too, create a visual space for the gods and heroes to inhabit and contain their power. In these mandalas, the underworld holds the center, the gods are around that in their sun rafts and then the four sacred plants growing out of the three roots are in the outer portion. All of this created from memory and reflecting the sacred myths of the Navajo nation. After a closing ceremony that affirms fertility, strength and renewal prayer feathers are placed and then, as in the Tibetan tradition, all is destroyed.

Hildegard von Bingen, the great 12th century visionary and relatively recently declared Doctor of the Church, began supervising the creation of mandalas based on her visions when she was in her forties. Those prophetic visions had been with her from a very early age but she kept them hidden until much later in her life. Having entered a convent at the age of eight she became a prolific writer (through secretaries) on multiple topics including philosophy and herbal medicine. She was also the composer of beautiful chants that are still sung and listened to today. Her mandalas are thought to have such visual potency that they offer an experience of darshan – the Hindu word for the simultaneous act of seeing and being seen by a deity.

Not unlike the Tibetan mandalas, Hildegard’s images also emphasize the importance of a cosmic equilibrium and the sacred nature of all life. She also sometimes ‘quartered the circle’ when depicting the four elements which echoes the Native American construct of the four sacred directions. Her conception of the Divine was held in the term Viriditas and is essentially feminine and affiliated with nature. It is variously translated as fertility, growth, vitality, freshness and a general greening that some see as a pre-cursor to today’s ecological warriors.

There is also a connection with Carl Jung as Hildegard’s images were a focus of study for him and informed his work on his conceptualization of the Self. He wrote, “The squaring of the circle is one of the many archetypal motifs which form the basic patterns of our dreams and fantasies. But it is distinguished by the fact that it is one of the most important of them from the functional point of view. Indeed, it could even be called the archetype of wholeness.”

And, of course, the labyrinth – the organizing symbol of this website – is also a mandala. One walks a labyrinth to center one’s self, to ground, to align with something larger that ourselves. It is a path many have walked across many cultures for many centuries.

I’d like to end with positing the possibility of a larger container for our impermanence – even though our human senses can be inherently limited in their capacity to see the bigger picture if you will. Paradoxically, the mystery of science sometimes points to an alternative reality.

It was Albert Einstein who once said, when speaking of a great friend’s recent death: “Michele has left this strange world a little before me. This means nothing. People like us, who believe in physics, know that the distinction between past, present, and future is nothing more than a persistent, stubborn illusion.”

Do you feel lost in a labyrinth and can’t find your way out? Contact me for some guidance and direction.

You can find out more about mandalas here:http://www.mandalaproject.org/What/Main.html

more about Jung and mandalas here:https://www.carl-jung.net/mandala.html

Image Credit: Kevin Buehler. (Image was not altered from original.)